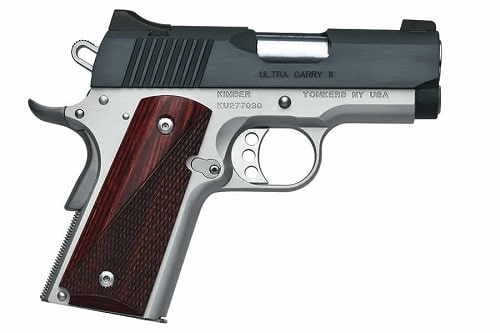 This is a gun for the skilled  and discerning shooter. It requires a little bit of initial babying and caring for, after which it will perform beautifully. If you can afford it, and are after a premium grade compact 1911 for concealed  carry, this is your gun.

The Kimber Ultra Carry II is a premium grade compact 1911 style pistol available in 9mm and .45 ACP. It can be had in a variety of finishes, and is designed for the discerning gun owner who wants the utmost in quality and tradition for their carry pistol. But how does it stack out? Clearly a Kimber Ultra Carry II review is in order, and we’ll pick over the most popular versions of this gun, and let you decide for yourself.

Who is Kimber Ultra Carry II Pistol for?

Compact 1911’s are increasingly popular with gun owners. The design is time honored and there is plenty of aftermarket support. But in a world full of high capacity polymer framed handguns, why should anyone bother with a metal framed 1911 with a less than ten round magazine capacity? Despite being a design that is over a century old, the 1911 has an enduring cultural legacy in the United States, and isn’t going away anytime soon. That alone makes it desirable among many American shooters. Plus it is an inherently safe design, as it requires the operation of two different safeties to fire. While the size and magazine capacity may be offputting to some, it is a fact that nothing sticks around in regular use for over a hundred years without something going for it.

In other words, our Kimber Ultra Carry II review will demonstrate that this gun is for pretty much anyone who wants a small, discrete handgun for regular carry, because it is ideally suited for exactly that kind of role. Additionally, with magazines under 10 rounds, this gun is ideal for ownership and carry in states with magazine capacity restrictions. Available in both 9mm and .45, you can choose the hard hitting, but also harder recoiling .45 or the softer recoiling 9mm. When using modern ammunition, there is little practical difference in performance, but there is certainly nothing wrong with consumer choice!

Our review of the Kimber Ultra Carry II found that it breaks down a bit differently than most 1911s. A special tool is required to hold the guide rod in place while the gun is stripped, and the heavy three inch bull barrel that Kimber uses in this gun is held in place without the traditional bushing assembly commonly used on the 1911 pistol. However, field stripping is still relatively simple, and there is usually little reason to remove the barrel, guide rod or recoil spring assembly from the slide. Consult your owner’s manual for the precise takedown procedure. You will find though, that it is fairly similar to most 1911’s.

Guns are built to varying levels of tolerances. Some guns require little to no “break in period” where the operation of the gun is required to cause various parts to wear against each other to provide a final fitting, while others, typically precision guns like a Kimber, have a break in period.

The Kimber manual recommends shooting 400 to 500 rounds of .45 230 grain full metal jacket ball ammo, with a cleaning and lubrication every hundred rounds. Use a standard 115 grain or so 9mm ball ammo for 9mm models.  During this break in period, your gun may experience malfunctions, such as jams, failures to cycle, feed or eject, or other problems. This is normal, and to be expected, as the precision fitted parts of your Kimber work against each other to achieve a final, and reliable fit.

After your gun has been broken in, maintain it per the instructions in your owner’s manual. You will need to lube and clean it on a regular basis. Some shooters do it after every shooting session, others go several hundred rounds between cleaning, or even just wait to see when accuracy starts dropping off. You will  need a good gun oil and a basic cleaning kit to keep your Kimber properly maintained. All moving parts should receive a drop or two of gun oil, as well as the slide rails, barrel hood, top of the barrel, and other parts as detailed in your owner’s manual. Do not over lubricate your gun, and wipe off any excess oil. The Kimber Ultra Carry II is a very safe and reliable handgun when operated properly. Like any 1911, it can be carried with a round in the chamber, and the hammer fully locked back, with the safety on. Also like any 1911, it requires both the thumb and grip safety to be off before a round can be fired, making it one of the safest semi auto guns produced.

Initial operation of your Kimber is likely to be unreliable, as previously detailed when we discussed the break in period. It is recommended that you properly break in your gun before questioning the reliability of it. All semi auto handguns can be picky about the type of ammo they use, but all should  also function perfectly with standard ball ammo. Be sure to work out what types of ammo work best in your gun, and it will function beautifully.

Because Kimbers are built to tighter tolerances than most production handguns, they are extremely reliable and accurate, but that also requires more careful choices in ammunition and magazine selection. The payoff is superior performance.

When shooting .45, the Kimber Ultra Carry II may be uncomfortable for some shooters due to the light aluminum frame. However, shooting the 9mm version will remedy that issue. Recoil will be stout, but manageable in either caliber, but again, reduced in 9mm. For either version, the gun is extremely comfortable. 1911 style pistols are quite comfortable to shoot, and Kimber has paid close attention to the needs of the concealed carrier, and offers plenty of snag free rounded corners, and easy to access controls. Overall, it is a very comfortable handgun to shoot.

Kimber ships the Ultra Carry II with a pair of magazines, a trigger lock, takedown tool and owner’s manual.  A new owner will want to add a quality holster, and maybe a third or even fourth magazine and a cleaning kit.

1911 style pistols are extremely upgradable and there are an untold number of upgrade parts available. You could literally strip this gun down to the bare frame and build an entirely new pistol off it if you wished. However, there is little reason to, as Kimber ships a high quality gun in the first place. You may wish to change grips to something more comfortable, like rubber grips, or finger groove grips, or even grips with a built in laser. You could choose to change the type of sights, or even change calibers with different types of barrels and magazines. In short, you can do basically anything you want to this gun, and are restricted only by law and your wallet.

There are also plenty of holsters available, including traditional leather holsters, inside the waistband holsters, shoulder or pocket holsters, and even law enforcement grade Kydex holsters with multiple levels of retention.

This isn’t a gun to choose if you just want a standard rack grade gun. This is essentially a production custom gun, and is priced and built accordingly. Compact 1911’s in 9mm and .45 are increasingly popular, and represent one of the most popular ways to keep this century plus old design relevant in a world of inexpensive compact polymer concealed carry pistols. If you take the time to learn your Kimber, you’ll come to love your Kimber.

Thanks for reading and I hope you found this Kimber Ultra Carry II review helpful. If you have any questions or comments please feel free to leave them in the comments section below.