Expensive, slightly dated in design, and heavy compared to other .380 pistols currently popular. But boy are these nice guns. If you want something few other people have, and appreciate Old World craftsmanship, then you’ve found it. If you’ve got the money, you should get one.

Beretta has been building compact semi automatic handguns for nearly a century. Their pistols were used in WWII by Italian and German troops alike, and were very popular souvenirs with Allied troops who valued their compact size. After the war, Beretta found a willing market in the US for these quality 9mm, .380 and .32 pistols, and eventually in 1976, a number of mid sized pistols in smaller calibers was sold in the US under the broad umbrella of the Beretta Cheetah line. However fascinating many of these guns are,we are going to do a review on the Beretta 84 series as a related Beretta 85 review.

The .380 cartridge has seen a renaissance in the United States, and once again has become respected for use in concealed carry pistols. This has been due to a new generation of lightweight polymer framed pistols that can handle the .380. However, Europeans have long thought highly of the .380, and Beretta has been selling some of the finest .380 pistols ever made in the United States long before it caught the eye of trendsetters. We are looking at two similar, yet different guns. The Beretta 84 series features a double stack magazine and holds 13 rounds of .380, while the Beretta 85 series holds 8 rounds in a single stack magazine. Both guns have their place, and both are extremely popular. Let’s take a look and get going with a Beretta 85FS review, and then review the Beretta 84FS!

Who is it for?

In preparing a Beretta 84fs Cheetah review, we first had to wrestle with a clash of cultures. American gun culture and concealed carry culture is unique in the world. The Beretta 84fs and 85fs are mid sized guns by any standard, but for some parts of the world, guns this size play a different role than they do in the US, inasmuch as this size and caliber of gun is often considered acceptable for law enforcement and even military duty. With that in mind, it is clear Beretta had a large global market in mind, particularly with the 13 round model 84.

However, in the United States, mid sized .380 pistols are seen as too small for law enforcement or military use, and these guns become something for the concealed carry and home defense market. Based on the wildly successful Beretta 92 style, the model’s 84 and 85 have undergone several minor changes which we’ll get into in just a minute. What we are looking at then, is a mid sized handgun in a cartridge often considered the minimum suitable size for self defense. The weight of these guns compared to modern polymer frame pistols can be a turnoff for some, and an attractive features to others, and can limit their usefulness in some forms of concealed carry. However, they are a high quality, premium handgun, and remain popular with well informed persons.

Variations of the Beretta Cheetah

We’ve already introduced the key difference between the Model 84 and Model 85. However, there are several variations on the them. A review of the Beretta 85f shows a squared off “combat” style trigger guard, as opposed to the rounded trigger guard found on the original Beretta model 85. In addition, it introduced a chrome lined bore and chamber, proprietary, finish in place of bluing, plus an ambidextrous safety which also serves as a decocker.  In keeping with that theme, our review of the Beretta 85fs shows additional, minor internal modifications which are present in the current production models. A review of the Beretta 84fs shows the same thing; namely the squared off trigger guard and minor internal tweaks.

In each case, base model 84 or 85, 84f or 85f or the fs variant, the gun is appreciably the same, and the minor revisions are just that- minor revisions that appear in any popular manufactured good as it is tweaked for consumer demand, superior performance and greater efficiency. The fs variants are currently manufactured by Beretta and are available through your favorite gun dealer.

All models from the Model 84 Cheetah to the Model 85fs share certain similarities. Both are scaled down versions of the Model 92, and persons familiar with that popular handgun will have no trouble transitioning to the smaller Cheetah.

Current production guns feature an ambidextrous safety/decocker which was not present when we reviewed the Beretta 84, but it can be found on both f and fs series Model 84’s and 85’s, and a push button magazine release, which again, is present on all models. All guns have plastic, or optional hardwood grips, fixed sights, and may have an optional nickel plated finish available as well.

The various Beretta Cheetah models take down the same way. As with all pistols, remove the magazine and clear the chamber. Press the takedown button and then rotate the takedown lever. Once rotated, you may pull the slide forward and remove it, along with the captive barrel and recoil spring assembly. You may remove the barrel by pressing the guide rod and recoil spring out of the slide. Assembly is a reverse of this procedure.

There is no reason to take it down further, unless the gun is malfunctioning in some fashion, at which point it should be taken to a competent gunsmith. 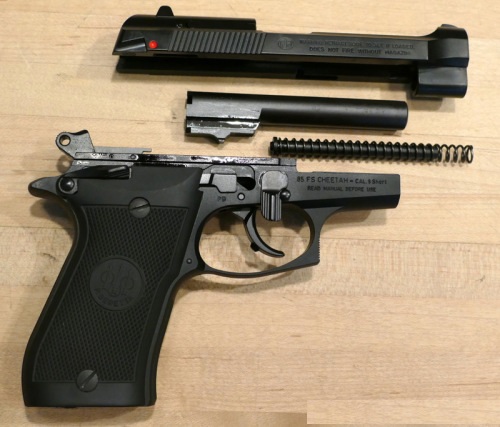 The Beretta 84fs and 85fs are very easy to maintain. The field stripping outlined above is all that is required to access the parts which require cleaning and lubrication. After each shooting session, wipe down carbon buildup, and lubricate all moving parts. Do not over lubricate, and wipe down any excess oil after assembly.  Clean the bore of your pistol on a regular basis to prevent degradation of accuracy. The Beretta 84fs and 85fs are both extremely reliable. The open top slide design is meant to greatly reduce the chance of a jam or other malfunction due to an improperly ejected or chambered case.

Because these are simple blowback pistols, their reliability is enhanced, as any round of sufficient power will cycle the action. All in all, they are extremely safe and reliable handguns.

When fired in a medium sized alloy frame gun with steel slide, there isn’t much felt recoil from the somewhat underpowered .380 round. While considered sufficient for self defense, shooters used to more powerful rounds will notice the Beretta 84fs and 85fs have an easy recoil compared to many of the small, snappy compact .380’s currently popular.

They are also very comfortable guns, although the double stack 84fs might be a bit too bulky in the hands of some shooters. All in all, Beretta has built a very reliable, and very easy shooting pair of handguns that function well as concealed carry or nightstand guns.

Beretta ships the 84fs and 85fs with spare magazines, a trigger lock and owner’s manual.

There are very few upgrades available or even desirable for the Beretta Cheetah. Swapping plastic grips for wood grips is popular, and Beretta sells leather holsters and quality wooden grips. Some shooters like to purchase an extended, threaded barrel in order to install a suppressor where legal. Otherwise, while these guns are popular and reliable, there isn’t much in the way of accessories or upgrades beyond grips and holsters. On the other hand, you really don’t need much else in the way of upgrades.

The Beretta Cheetah line has been around for over 40 years, and doesn’t appear to be going anywhere. These finely crafted .380 pistols are relics of a different culture and different mindset to how a handgun should be used, and are a bit out of place to the American concealed carrier. However, they are fine guns, and should be respected for what they are. And frankly, I’d rather carry an 84fs than the latest hard recoiling poly framed .380. The market is awash with nearly identical mid sized and compact .380’s. But there is only one Beretta Cheetah. Ok. Two of them.

Thanks for reading and I hope you found this Beretta Cheetah review helpful. If you have any questions or comments please feel free to leave them in the comments section below.