All AR-15s are very reliable weapons.

Due to the upgrades we’ve talked about, this one does shoot slightly better than a standard AR-15.

It’s a sleek looking tactical weapon, if that is your style.

A lot of the customization is already done for you, so compared to a standard AR-15, there’s not too much you will want to do.

Bang for your Buck

Due to the fact that Sig added all of the upgrades for you, it is a pretty expensive weapon. Some will argue you could do the same upgrades yourself at a cheaper price.

Overall, this is a high quality AR-15. It has some excellent upgrades that are done from the factory. It shoots more accurately than the standard AR-15, but the functioning is entirely the same. It is accurate, reliable, and a fun time to shoot.

I just saw one of these at my local gun store recently, and was immediately impressed. After handling the weapon a little bit, I had to learn more about it, and I was only more impressed from there. The Sig Sauer M400 is an excellent option if you’re looking for one of the top of the line AR-15s out there.

While it is an AR-15, it does have a few features that separate it from you average AR. In this article, we will cover everything there is to love about this weapon. Continue reading for a full review.

This is one of the best things about the AR-15 platform! The weapons can be used for so many things. They are the most popular weapon in America due to this durability.

This weapon is obviously excellent for plinking and range shooting. It’s very easy to use, ammunition is pretty inexpensive, and they are pretty accurate weapons. You can enjoy a great day at the range with an AR-15. 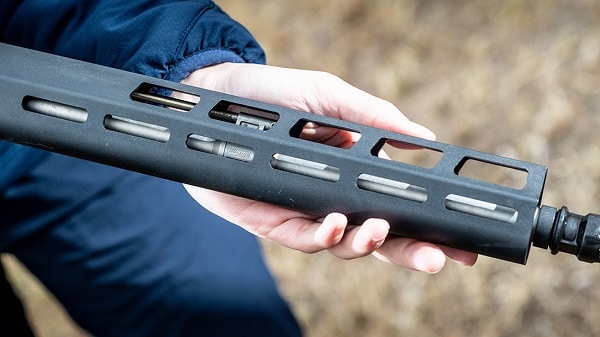 Because this specific AR-15 comes with some excellent features right out of the box, you could definitely do some competition shooting with it. They can be decent at distance, and are great for three gun competitions as well. Due to the fact that this weapon comes with many upgraded parts, you wouldn’t have to add much to it.

However, you can also do a good bit of hunting with AR-15s as well. They are excellent for hog hunting, coyote hunting, and varmint hunting. Some people even use them for deer hunting, although I would not personally recommend that.

Obviously AR-15s are also good for tactical uses, if you’ve got any. Since they were adopted by the military, albeit as the M4, there is obviously plenty of use for AR-15s in the tactical realm.

AR-15s are also commonly used for home defense. They are semiautomatic, so you can shoot them decently fast, and they are really intuitive to use. They can be matched with some great optics, and are definitely viable options for home defense.

The Sig M400 is a top of the line AR-15. While this does come with some added cost, it also includes some excellent features that you won’t have to worry about adding later on.

The weapon has a 16 inch barrel and is pretty lightweight at only 7.3 pounds. It’s got a couple specific features that separate it from lower level AR-15s. It is a more accurate weapon, for a couple different reasons that we will get into momentarily.

The pros of this weapon are the M-LOK handguard, upgraded grip and stock, enhanced trigger, nitride barrel, and included red dot sight.

The handguard is a full length M-LOK handguard, which is made by Magpul. A handguard like this is a pretty common upgrade for most AR-15 users, so the fact that it is included will save you money. It also cuts down on weight significantly when compared to the traditional picatinny rail. M-LOK makes it really easy to mount any accessories you might like. 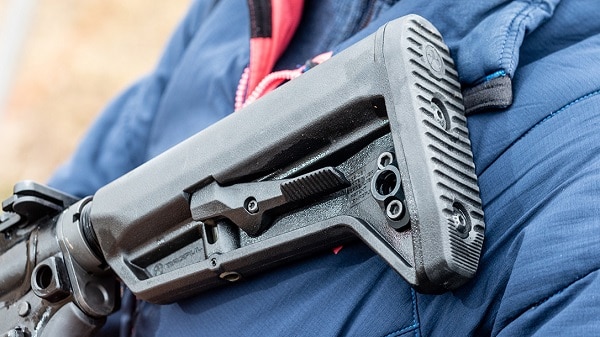 However, the advantages of the handguard are more than just cosmetic. The barrel is free-floated, so it doesn’t make contact with any part of the weapon other than the receiver. This cuts down on any variance that could be present, to allow for increased accuracy.

There are a few other features that allow for increased accuracy. The nitride barrel helps, but so does the enhanced trigger. Since the trigger is higher quality and adjustable, you are able to get a more consistent trigger pull. This reduces flinch and allows you to shoot more accurately.

The improved grip and stock of the weapon also allow for increased ergonomics, which once again, increases the accuracy of the weapon. Nearly every feature of this weapon was designed to be lightweight and accurate.

One final feature that we really like about this weapon is that it comes with a red dot sight. The Sig ROME05 is a compact red dot sight, which is the exact type of sight that is commonly used on AR-15s. It is a pretty simple red dot sight, but it has multiple settings and will greatly improve your target acquisition. Shooting with the sight is easy, and it will improve your accuracy. 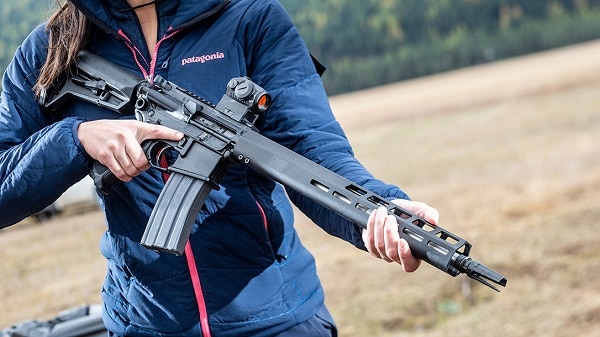 However, all of these features do come with some cons. The weapon is pretty expensively priced, for starters. While it does have excellent features, many will argue that you could start with a basic AR-15 and upgrade it yourself for less money.

Similarly, since all of the upgrades have been done for you, it limits your own personal choices. AR-15s are very easy to accessorize and upgrade, but it will come at an added cost. If the Sig M400 doesn’t have exactly what you want, you’d be better off buying a less expensive AR-15 to upgrade it yourself.

Despite what you may hear, AR-15s are very safe weapons. They have an extremely easy to use safety on the lower receiver, and they are very drop safe to begin with. AR-15s are very intuitive to use, because you are able to easily tell whether the weapon is on safe or fire. 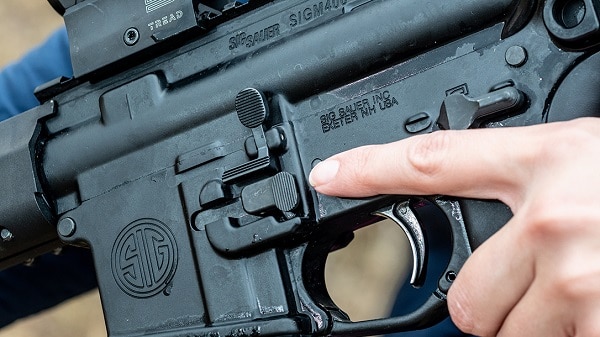 In terms of reliability, AR-15s are some of the most reliable weapons out there. As long as you properly maintain the weapon, it will last for thousands and thousands of rounds.

Speaking of maintenance, the weapon is very easy to maintain. All it takes is two pins to take apart the weapon, and you will be able to easily access the internals.

We talked briefly about the ergonomics of the weapon before. It’s got a great stock and grip, which do a lot to improve how it feels in your hands. If you’ve ever felt a standard mil spec AR-15, you know that the stock and grip aren’t the most comfortable parts.

Improving these makes the weapon feel that much better. AR-15s shoot extremely naturally, so improving these two parts make it even better.

Overall, this weapon is very enjoyable to shoot, as most AR-15s are. However, due to some of the improvements made by Sig, this one is more enjoyable than all bone stock AR-15s.

Another one of the reasons that AR-15s are so popular are that they are extremely easy to upgrade and add accessories to. Since Sig already upgraded so much of this weapon, we will focus on external accessories. If you don’t like the upgrades already done to this AR-15, simply buy a different one and upgrade it yourself. It’s not worth the money to buy this one, and then also change out some of the upgraded parts.

For starters, you might like to add a grip of some sort. I prefer the angled foregrip, but some people prefer a vertical one.

The weapon already has a red dot sight on it, so there’s no sense adding another optic. However, you may want to add a flashlight to it. To do this, add a light mount like this one and then clamp a flashlight into it. This flashlight is a good option, but there are plenty out there.

You should also add a sling of some sort to it, whether it’s a one point sling or a standard sling. Lastly, the weapon only comes with one magazine, so you are probably going to want a couple more. I always recommend Magpul PMAGs.

Overall, this is a high quality AR-15. It has some excellent upgrades that are done from the factory. It shoots more accurately than the standard AR-15, but the functioning is entirely the same. It is accurate, reliable, and a fun time to shoot.