If (or when) the next long-term disaster strikes, having any sort of rifle in your arsenal is better than having no rifle at all. But not every long gun can be considered a “go-to” survival rifle. Some weapons are bulky, heavy, and slow. Others are expensive and use weird ammo.

We’re looking at the top best survival rifles of 2020. This guide covers conventional break-down rifles chambered in .22 LR, pistol-caliber carbines, even a compact variant of the black rifle that you can upgrade yourself.

What Makes a Good Survival Rifle?

Really, any rifle could be called a survival rifle. But some are purpose-built for the task. Others serve the prepper best with few downsides. If you’re trying to take your first red-meat meal in weeks, you probably don’t want to lug around a gigantic .308 bench gun with a 26” barrel to do it.

A best survival rifle needs to be:

Reliable. Every shot will count when you put your survival rifle to actual use. You don’t want to line up a shot on your next meal and pull the trigger, only to have a light strike or failure to feed.

Lightweight. If you’re humping around with a survival rifle when it really counts, you’re probably in the sticks and on foot. You likely have quite a bit of gear, too. Your survival rifle needs to be lightweight and easily portable. Collapsible and take-apart features are a huge bonus.

Accurate. Remember, every shot counts. You don’t usually get a follow-up on that skittish deer or rabbit. Your survival rifle needs to match point of aim with point of impact, every time.

Simple and affordable. A good survival rifle is easy to use and cheap. After all, good prepping doesn’t mean buying the most expensive stuff. It means buying the stuff that works best. In prepping, your gear should serve its purpose well – but it shouldn’t cost you an arm and a leg.

The Best Survival Rifles of 2020

Now that we’ve covered our requirements, let’s look at the best survival rifles on our list: 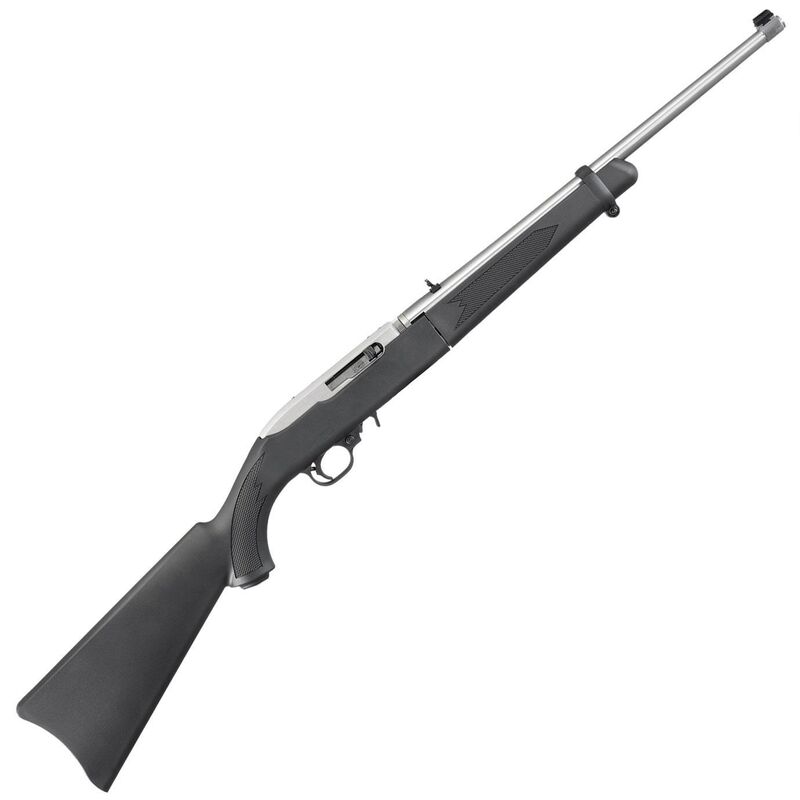 Why we love it: The Ruger 10/22 Takedown is one of the most accurate and reliable survival rifles ever made.

Ruger’s legendary 10/22 easily takes #1 on our list because it satisfies nearly all our requirements. The Ruger weighs just 4.6 pounds and it’s incredibly reliable. Thanks to a high-quality stainless 18” barrel and accurized trigger housing, it may also be the most accurate rifle on our list. It comes with adjustable rear sights and fixtures for easily installing your own scope or optic. If you ever heard an old man talking about “picking the wings off a fly”, he probably claimed to have done it with a Ruger 10/22.

This rifle uses a patented rotary magazine with a 10-round capacity, but you can upgrade to a 25-round magazine. The rifle’s weight is impressive when you consider that Ruger took the original, fixed 10/22 and upgraded it to function as a proper takedown survival rifle. Even with all those fasteners and tooling, it still weighs less than 5 pounds and can now fit inside your backpack. 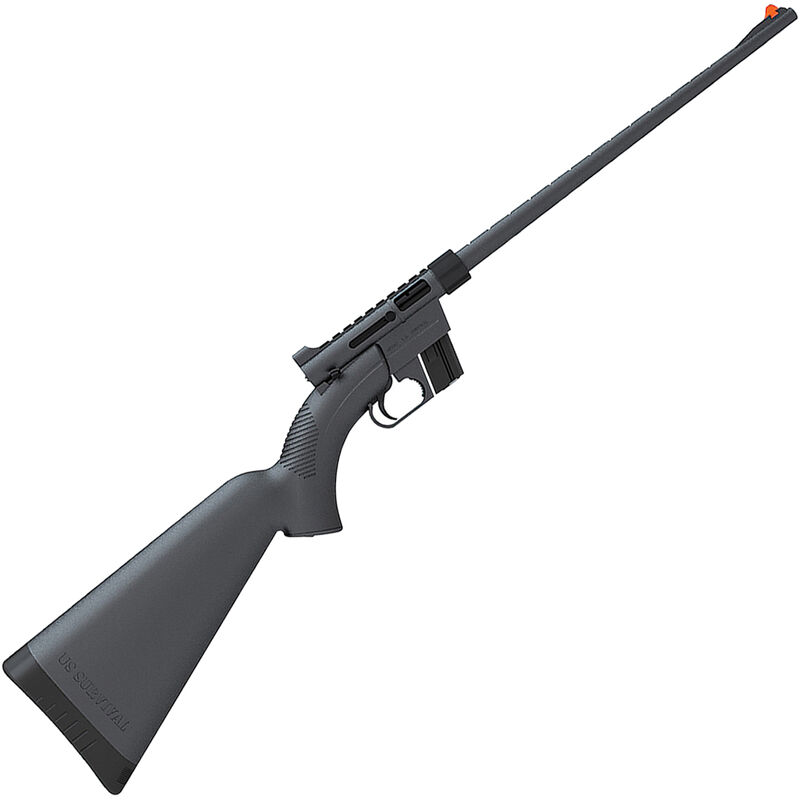 Why we love it: The AR-7 might be the most compact and portable survival rifle you can buy.

If you want the O.G. survival rifle, the one that started it all, you’ve found it: The Henry AR-7 first earned its keep as a SHTF gun in the U.S. Military, way back in the 50’s. Air Force pilots and flight crews keep the AR-7 onboard even today, just in case they crash in the sticks (or unfriendly territory).

The secret sauce to this gun’s ultra-compact recipe is how it collapses. Unlike other survival rifles, the receiver, barrel, and buttstock separate into three pieces. The buttstock is hollow, allowing the barrel and receiver to be stored inside. The shoulder pad acts like a watertight seal, allowing the rifle to be submerged if needed.

No tools are required to break down the rifle, either. Because it fits inside the buttstock, the AR-7 is so sleek and compact that it could fit in even the smallest bug-out bag without taking up much room. The barrel still measures 16.5”, offering excellent accuracy. It comes with an 8-round box magazine, though you can upgrade to a 15-rounder. 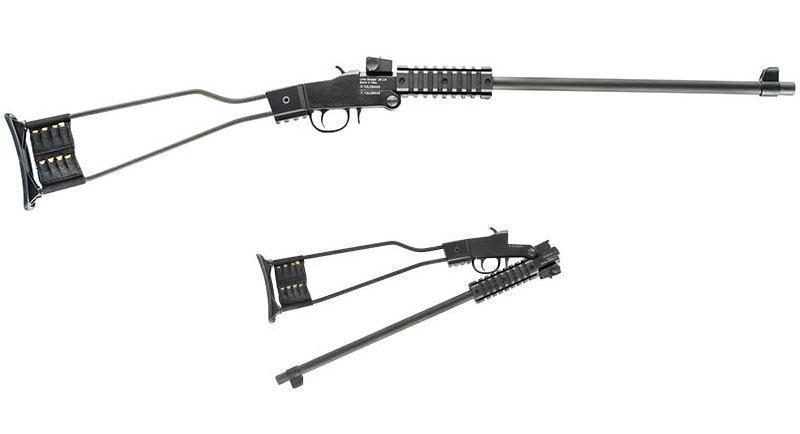 Why we love it: The Little Badger is the lightest and most affordable survival rifle you can buy.

For the nomadic prepper who wants to pack ultra-light, the Chiappa Little Badger is the perfect rifle. It weighs just 2.6 pounds and sports a skeletonized stock with an integrated ammo saddle that holds up to 12 rounds. This rifle sacrifices some capability for its small design, using a single-shot, break-action receiver with no magazine.

The Little Badger makes up for its one-shot-one-kill discipline by offering magnum chambers and plenty of accuracy. It ships with a 16.5” barrel and adjustable front and rear iron sights.

The tactically-minded prepper will enjoy the included Picatinny rails provided on both sides and the top of the receiver. This allows you to install a tac-light, additional saddle, and your favorite varmint optics. Notably, one rail is also installed under the lower receiver for a bolt-on pistol grip.

The Little Badger also collapses for storage and transport with no tools. Just break the action open as if you were reloading. Then, fold the barrel and upper receiver underneath the lower receiver and trigger guard. 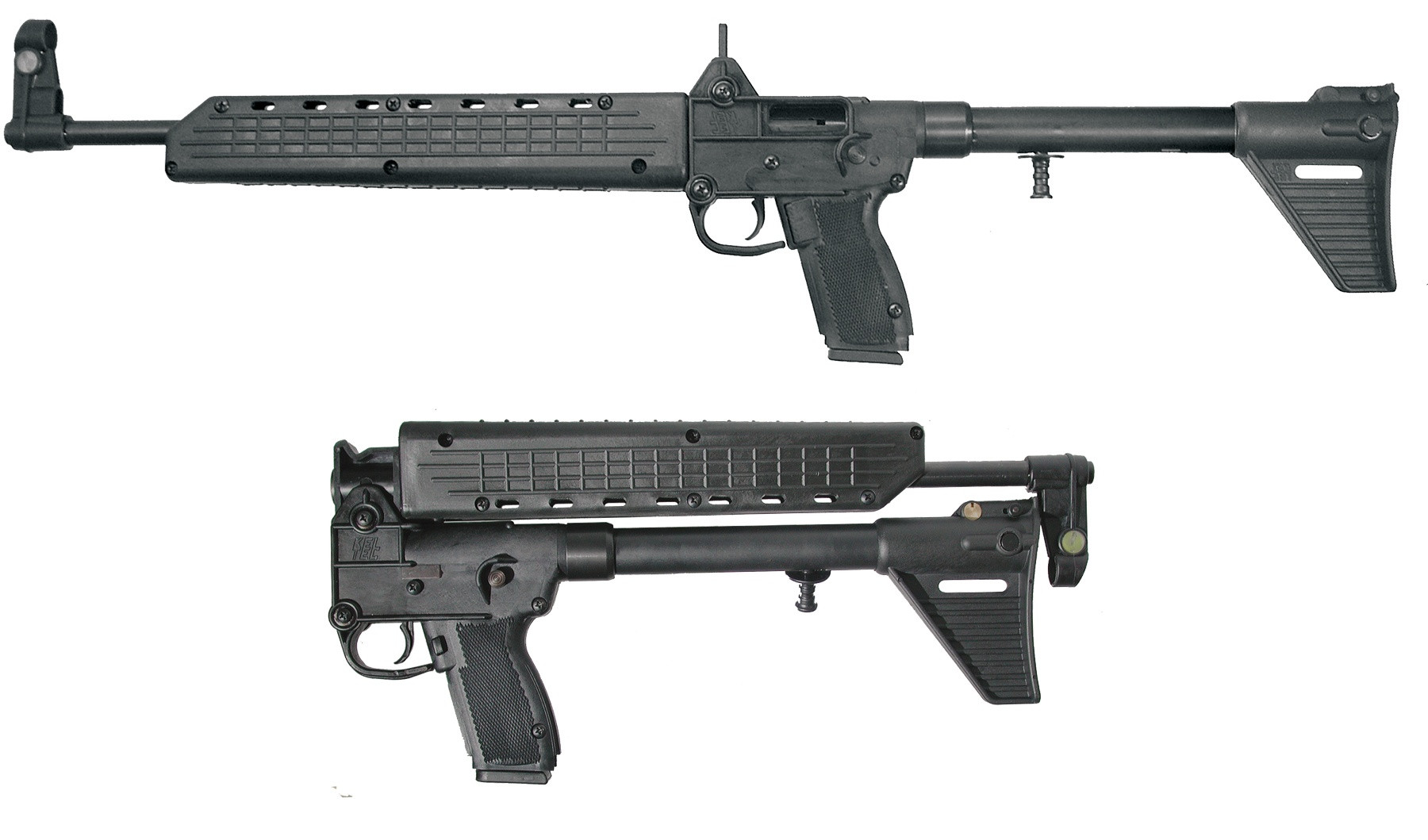 Why we love it: The SUB-2000 is one of the only survival rifles available as a pistol-caliber carbine.

Kel-Tec’s SUB-2000 is a wonderfully unique survival “rifle”. Really, it’s a pistol-caliber carbine. It’s an awesome SHTF gun because it provides the same form factor as a collapsible varmint rifle, but it offers preppers the opportunity to run with something that provides more firepower for defensive situations (and it works with ammo that most shooters already stockpile).

Like any other survival rifle, the SUB-2000 features a collapsible receiver that folds in on itself, no tools required. It sports an extendable buttstock with a conventional “buffer” tube, and it offers plenty of space for adding lights, optics, and accessories on the handguard’s rails.

A 16.25” barrel provides plenty of accuracy, while the receiver provides plenty of ammo capacity thanks to its ability to use Glock 19 magazines. The SUB-2000 folds and locks the upper receiver and barrel underneath the buttstock, allowing easy storage in smaller bags. 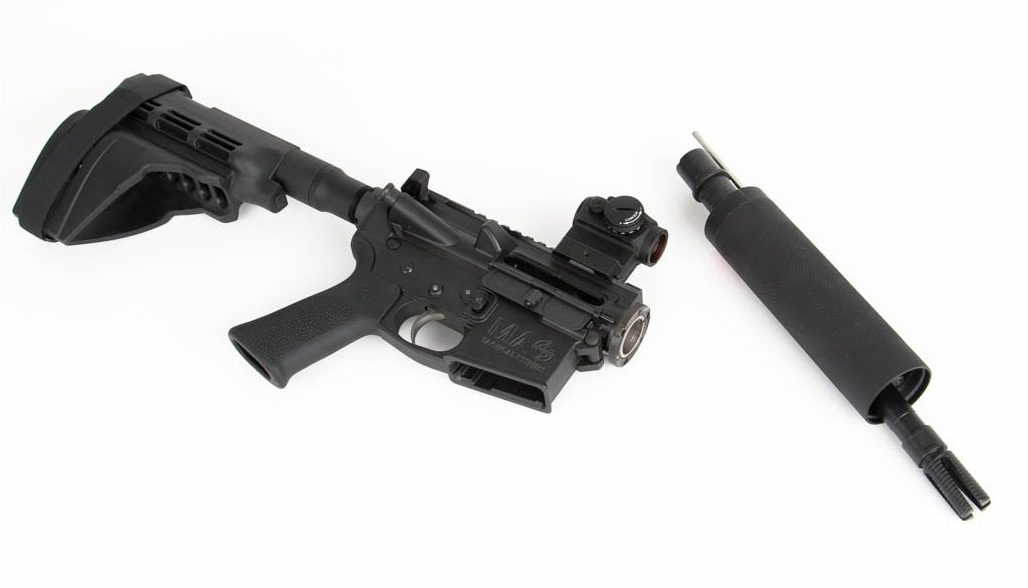 Why we love it: The AR-15 equipped with the Dolos QD makes for the most powerful and capable break-down rifle on our list.

The AR-15 satisfies the requirements of a survival rifle quite well. You can even build one from scratch (no paperwork required) using an 80 lower receiver. A lot of preppers buy or build one to keep with their bug-out bag just for this reason. It’s a relatively compact, lightweight weapon at around 5 to 6 pounds. It’s accurate up to 300 meters or more and it’s incredibly reliable. The usual 5.56 NATO or .223 Remington chamber yields capacity and performance – much more than .22 LR, obviously – in a similarly cheap, common, and compact round.

The AR falls short in one category: Its ability to be quickly broken down quickly and stored or carried. The average bug-out bag or kit can accommodate a black rifle once you separate the upper and lower receivers using the factory take-down pins, but this takes time.

The Dolos QD (Quick-Detach) Barrel System fixes all that by turning the rifle into a proper break-down rifle. The Dolos System replaces the barrel nut with a toolless locking ring, allowing you to separate the barrel, handguard, and gas system from the upper receiver with a simple twist.