Due to its combination of size and ballistics, the round is popular for a ton of tactical and target shooting. The limited recoil also makes it a great choice for these uses. The round also gets some use as a hunting round. However, due to the limited range and power, it is generally not used for hunting anything larger than deer.

>> The Best 5.56 Ammo for Home Defense and the Range
>> Reviewing the Best .45 ACP Ammo for Self Defense & Target Shooting
>> The Best 22LR Ammo for Varmint Hunting

7.62x39mm bullets are actually 7.92mm in diameter, while the overall case length is 39mm. The most common projectiles weigh between 120 and 125 grains, and the muzzle velocity is generally near 2400 feet per second. Each round will be slightly different though.

Obviously, 7.62x39mm projectiles are quite larger, which will increase the deadliness of the weapon. However, 5.56x45mm is fired much faster, which will give it a much greater effective range.

When firing 7.62x39mm ammo, you can generally expect a range of around 250 meters. Generally speaking, after around 200 meters, the shooter can really start to notice the bullet drop of 7.62x39.

In terms of accuracy, 7.62x39mm generally is not considered a very accurate round. However, at least some of this is due to the fact that the most common weapon in this cartridge is notoriously inaccurate. When using a higher quality weapon, 7.62x39mm is plenty capable of being an accurate round.

When choosing best 7.62x39mm ammunition, you must keep in mind your uses for the weapon. If you are just looking for a fun round to shoot around with, your choice must be different than if you are looking for a hunting round. On top of this, you must also keep in mind the price of the round.

If you don't have much time, I have some suggestion for you:

Keep in mind what your uses for the weapon are. If you are hunting, consider the muzzle velocity and terminal performance. No matter what your use, remember that brass cased ammunition is generally better for your weapon. 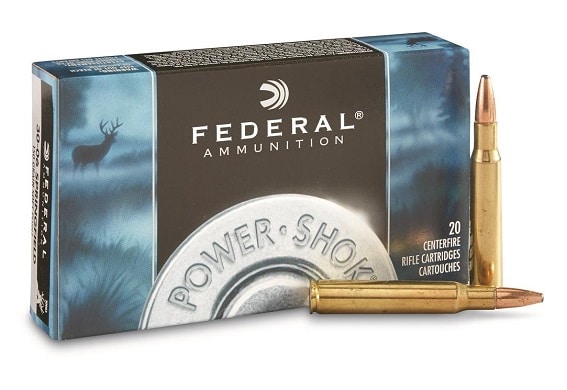 at Brownells.com at Cabelas.com at Basspro.com at Sportsmansguide.com

Federal Power-Shok ammunition is a classic hunting round. The projectile has a lead core with a jacketed soft point (SP) which allows for a consistent and reliable bullet expansion. The expanding bullet is able to damage more tissue, which is necessary for a quality hunting round.

The Power-Shok ammunition is hands down the best hunting round offered in 7.62x39mm. The terminal performance of this round is excellent, but the round is also extremely accurate.

The initial muzzle velocity of this round is around 2400 feet per second, and the projectile weighs 123 grains. In terms of accuracy, this round is one of the absolute most accurate cartridges available.

The cons of this ammunition are limited mostly to the cost. It is the most expensive on our list, but the accuracy and expansion of this round will be well worth it for you.

Due to the jacketed soft point terminal performance, this round is excellent for hunting and home defense purposes. However, this is also one of the most accurate rounds available, so it may be useful for precision shooting as well, if you don’t hand load your own ammunition. As far as range ammunition, there are much better choices out there. 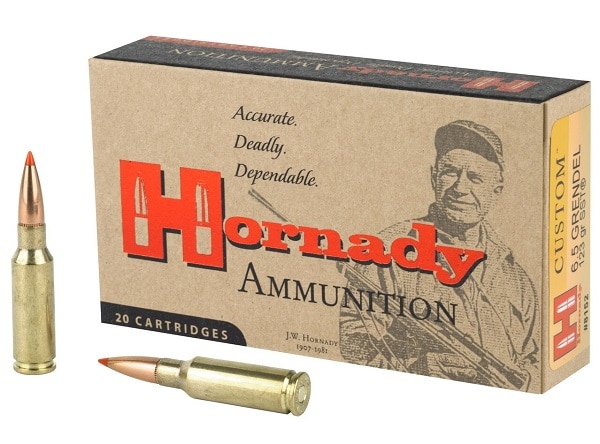 Hornady’s Super Shock Tip (SST) ammunition is designed to create damage upon target impact. The round has a polymer tip, which will be driven into the lead core of the projectile when it makes impact. This will create expansion as the bullet moves through the target. This round creates expansion, just like the previous one, but accomplishes it in a different way.

The 123 grain projectile has an initial muzzle velocity of 2350 feet per second, which is slightly slower than the previous round. While it is not as accurate as the Power-Shok, this is still a very accurate round.

However, where this round sets itself apart from the others is the specific shape of the projectile. The boat-tail design of the bullet creates less drag, which extends the range of the bullet. Comparing the ballistics of the two rounds shows how this one retains its velocity better.

The other pros of this round are the fact that all Hornady ammunition is hand inspected and the price. This absolutely guarantees consistency in terms of projectile and propellant weight. This allows for a very consistent shooting experience. As far as price is concerned, this is an excellent hunting load for the price.

The cons of this weapon are that it isn’t as good on impact as Power-Shok and it has a steel case. Hornady SST ammo is extremely well respected, but the expansion of Power-Shok ammunition is slightly better. However, the Hornady ammo is more consistent and more affordably priced.

This round is another excellent choice for hunting and home defense, due to the expansion. 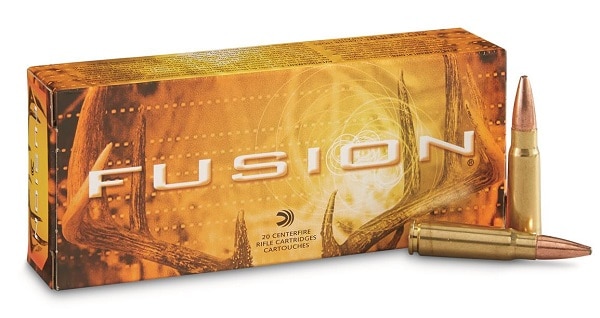 Fusion ammunition from Federal is another soft point round that is designed for deer hunting. The difference between Fusion and Power-Shok comes largely in terms of accuracy and muzzle velocity. They both have a soft point, but are slightly different in terms of terminal performance.

The 123 grain projectile is fired with a muzzle velocity of over 2400 feet per second. This makes it one of the fastest moving rounds on our list. However, with this added speed comes a sacrifice in terms of accuracy. The Power-Shok ammunition is far more accurate than the Fusion.

The pros of this ammunition are the expansion, brass case, muzzle velocity, and extended range. This round actually expands more than the Power-Shok ammunition. While it will not penetrate as deep, that makes this a very deadly round.

As we already mentioned, the muzzle velocity of this round is one of the absolute fastest available. Similar to the Hornady Custom ammunition, this round also has a boat-tail shape. It holds its velocity better than the Power-Shok ammo, increasing its range.

Due to the terminal performance and muzzle velocity, this round would be best suited for hunting and defense purposes. The decreased accuracy and higher price make this round not as good as some competitors for general shooting or accuracy shooting. 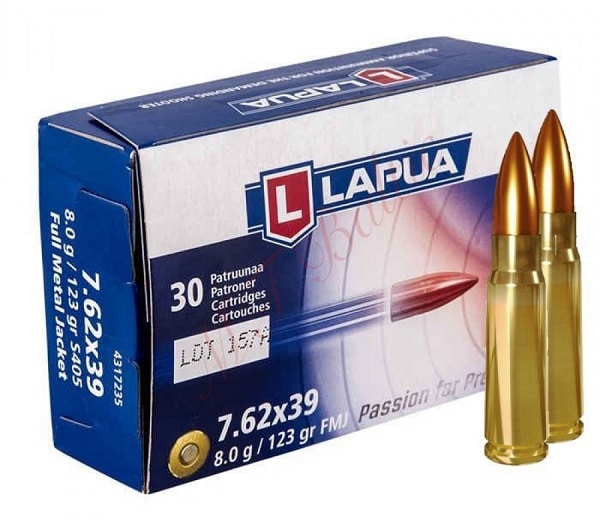 As far as accuracy is concerned, you can’t do much better than Lapua ammunition. This full metal jacket (FMJ) ammunition is definitely the best choice for shooting that requires accuracy.

Full metal jacket bullets are essentially the best range ammunition. The jacketed core will increase the muzzle velocity, but will also ensure that the rounds feed into the chamber more consistently. Although the military commonly uses FMJ bullets (or ball ammunition as they call it), it does not perform that well inside a flesh target. Since there is no expansion, it limits the amount of tissue that is damaged.

The 123 grain bullet of this round is fired just under 2050 feet per second. By the time it reaches it out to 200 meters, the velocity has decreased significantly, and the bullet has noticeably dropped. However, in terms of accuracy, this round is one of the absolute most accurate loads offered in 7.62x39mm.

The cons of this weapon are the muzzle velocity and limited terminal performance. However, given the purpose of this ammunition, it is to be expected. It is a very slow moving bullet that loses speed at a relatively close range, but that’s what it’s designed for.

This round is meant specifically for accurate target shooting. While it could be used for hunting, we would strongly recommend against it. There are much better options out there. Keep this one for any kind of accuracy or target shooting you might want to do. 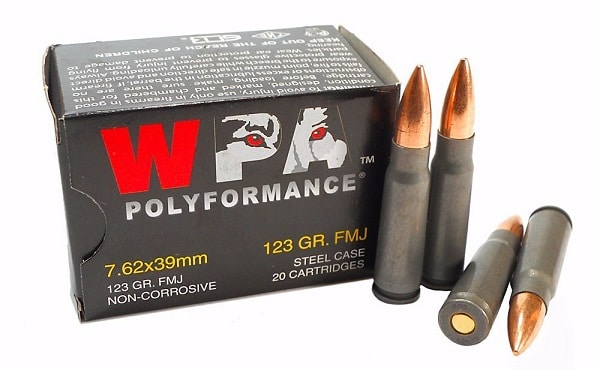 Many people will tell you to avoid Wolf ammunition. However, my opinion is that it’s acceptable ammunition as long as you know what you are getting.

It is fired relatively fast, at nearly 2450 feet per second, and the projectile weights are extremely consistent from bullet to bullet. As previously mentioned, the accuracy of this cartridge leaves something to be desired, but it works.

The cons of this ammunition are that it is in a steel case. However, at such an inexpensive price, this is to be expected.

Leave this round for range days, and nothing else. It is extremely cheap, so it will save you money to buy nicer ammunition for your real shooting needs. If you are looking for a brass cased range ammo, check out PMC Bronze.

As you can see, there are plenty of different ammunitions to choose from in 7.62x39mm. While there are many different options, each has their own pros and cons.

Keep in mind what your uses for the weapon are. If you are hunting, consider the muzzle velocity and terminal performance. No matter what your use, remember that brass cased ammunition is generally better for your weapon.

As long as you keep the basics in mind, it should be relatively easy to pick out ammunition to use. We hope this guide has been helpful in narrowing down the list.