The Single Six has been around for well over 50 years. My grandpa had one, and he swore by it. I learned to shoot with a bolt action .22LR, but his Ruger Single Six was the first handgun I ever shot. After he passed away, I’ve held onto his old Single Six ever since.

Ruger has continued to produce the weapon for years. The new Single Six, which is aptly called the New Model Single Six, is not much different from the old one. Obviously, as the years have gone on, manufacturing has slightly changed, but the quality is still there.

If you’re interested in learning more about this revolver, continue reading for our full review of the Ruger Single Six.

What is the Weapon for?

The Ruger Single Six is a single action revolver that shoots rimfire ammunition. The cylinders each hold six rounds. Single action and the cylinder capacity explain the name of the weapon.

The barrel of the revolver is 7.5 inches long, while the whole weapon measures 13 inches long. It weighs in at 45 ounces. 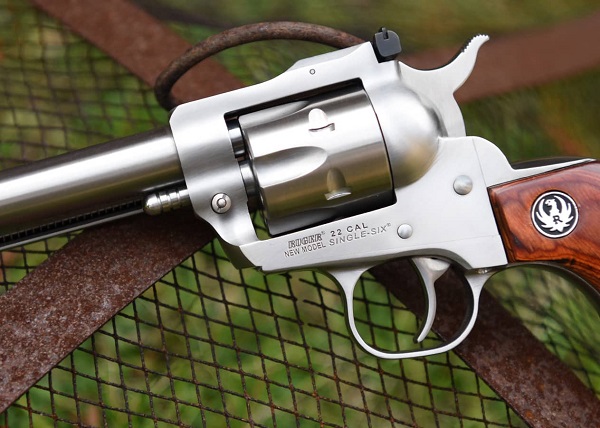 As you can see, this is a very large weapon. The barrel is extremely long, it is very heavy, and it shoots rimfire ammunition. This limits the uses of the revolver to a few main uses.

The revolver is a great plinking gun, is acceptable for killing varmint, and could be used for competition shooting.

However, like I said about my grandpa, this is also a great gun for teaching people the fundamentals of shooting. Due to the fact that it is a single action revolver, it’s really easy for a new weapons user to understand exactly how the weapon functions and exactly what they’re doing.

When you’re looking at a Ruger Single Six, right off the bat there’s a few things that you’ll love. First and foremost, the classic looks and styling of the revolver are great. It has a very classy look to it, and it always reminds me of years gone by.

But, the pros of this weapon are more than just cosmetic. It’s also a piece of history, so that’s at least worth nothing, if nothing else.

The other pros are that it is a very reliable and accurate revolver, and it’s extremely easy to use.

The accuracy of this revolver is great. The long barrel plays a part in this, due to the fact that it is extremely precisely made and hammer forged. If you’re looking to increase the accuracy of this weapon, it has integral scope mounts, so that you will easily be able to mount scope rings.

If you know one thing about revolvers, you’ll know that they are extremely easy to use and maintain. Revolvers are really intuitive to use. Most people know how they work without even having to be taught. You just have to cock the hammer, aim, and let it rock.

Maintaining them is just as easy. We won’t waste your time with this; search the information if you aren’t familiar. All you need to know is that revolvers are easier to maintain than semiautomatic pistols.

The difference between the “New Model” Single Six and the original Single Six is some added safety features. Ruger added a transfer bar safety mechanism, which essentially makes it impossible to fire unless the trigger is pulled. It makes it safer for all six chambers to be loaded.

Other than that safety, the rest is on you. Revolvers are very safe to begin with, due to how easy they are to use. You have to cock the hammer and pull the trigger for the weapon to shoot. Cleaning the weapon doesn’t require any pulling of the trigger, and it’s extremely easy to visually see if there is a round in the chamber.

As far as reliability, this should go without saying. Revolvers are arguably the most reliable weapon out there. It’s nearly impossible for them to jam. There are so few internal parts, that there is essentially nothing that can go wrong with it.

As long as you clean the weapon occasionally and treat it right, the Single Six will last for years and years to come. Trust me, I’ve got proof of this sitting in my gun safe right now.

Seeing as this is modeled after an extremely old revolver, the comfort isn’t exactly on par with some of the more modern weapons. It’s got a classic, curved revolver grip.

While I don’t mind it, many people don’t particularly enjoy shooting them, especially if you’ve gotten used to ergonomic finger grips and other grip features that are more common on modern pistols. These revolvers are just smooth wood.

As far as the shootability, this revolver can’t be beat. Due to the weight of the weapon, you feel almost no recoil at all. It shoots as accurately as you can expect to be with .22LR, and the sights are fully adjustable, so you will be able to ensure that you are on target.

This is a basic revolver with adjustable sights, so it is pretty much ready to roll right out of the box. However, there are a few things worth purchasing along with it, or potentially upgrading down the road.

First, we recommend that you get a holster of some sort for carrying it on the range or around your property or whatever you’re going to do with the weapon. One option is a belt holster, such as this one from Galco International. You could look to get some night sights installed on the revolver. Williams Gun Sights make a good fiber optic option:

If you ever want to mount any accessories on it, you could get this picatinny rail mount for the weapon. This will give you the option to mount almost any sight.

Checkout another review from 1957Shep:

After reading my Ruger Single Six review, you will probably notice that it is a great weapon, although its uses are somewhat limited.

It’s extremely enjoyable to shoot, and does so pretty well. As far as .22LR goes, it is an accurate weapon, and of course it’s got the expected Ruger revolver reliability.

All in all, I’ve been happy with my Single Six, and I take it to the range with me just about every time. If for nothing else, revolvers are not nearly as common anymore, so you’ll get a lot of people interested in the weapon just based on that fact alone.

If you have any questions or comments please feel free to leave them in the comments section below.