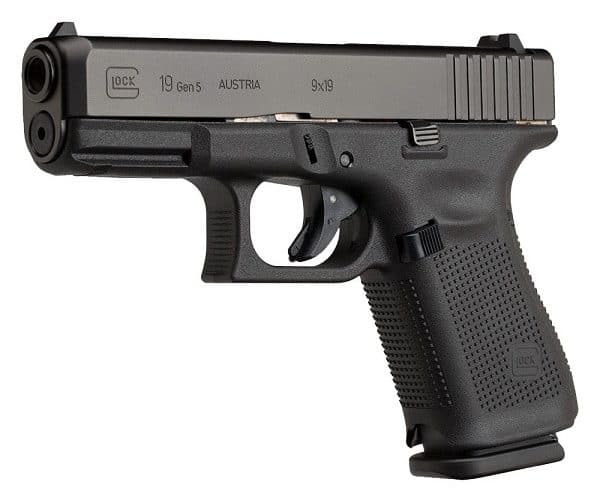 There appears to have been some initial reluctance to accepting the dual recoil spring assembly on the G4, despite the fact that the set up was working just fine on the company’s sub compacts for years. By now, those concerns have been safely put to bed by the G4’s performance in the field for almost a decade. The g5 benefits from this field testing by using the same system that was placed in service since the G4’s release in 2010.

The grip angle on the G5, like the G4 before it, does not feel quite so drastic as on earlier models, however, it is still there to accommodate the magazine, which has not changed shape. Once the pointing is addressed, the G5 19 continues to deliver acceptable to above expected shots on target. As always, individual factors apply, but Glock maintains a baseline to measure alternative deviations.

The additional backstraps that come with the G5 are a real blessing to the versatility of comfort for this pistol. Additionally, the removal of the finger grooves and more subtle grip texturing make the gun custom to fit for a majority of shooters out there. Both large and small handed shooters are put on an even standing with the G5’s grip redesign. Lefties in particular will also find the slide controls available to them a new and welcomed feature, though one they may have to get used to if raised and trained on all previous Glock models.

Glocks still look like Glocks and the G5 is no different…. That is not entirely true, it actually looks more like the G1 (not that the first model was ever called that while it was produced) than any of the models that came after, with the exception that it has the ubiquitous accessory rail. After the three plus decades, most people have come to expect a certain style (or lack thereof) from Glock, as long as its dependability remains constant. And to date it has.

Sights and triggers kits became available almost immediately and most sights for the Gen 3 and Gen 4 have no problem being put onto the G5. The real customization out of the box remains the extra backstraps. Those, along with the ability to switch the magazine release for southpaws really make the G5 one of the most adptable service pistols on the market.

Bang for your Buck

The Gen 5 is destined to be the new mainstay of the Glock line, although the G4 remains in concurrent production just as the G3 remained during years of the 4’s production run. The price differential is a little less easily explained between the two latest generations as both come with three magazines and backstraps. The G5’s ready use by left handers can certainly appeal to a portion of the population, but current market trends allow the G5 to be taken up for little to no difference, and it’s greater universality by either handed use makes it appealing to those who simply do not have one yet.

In 2017 Glock introduced the latest generation of their service pistols. The most obvious of the 35 new upgrades or additional features is the removal of the finger grooves on the grip. What was meant as an additional comfort proved to be quite the opposite for those whose hand sizes deviated from what Glock determined standard. As the grooves were most often the first thing removed during customization, the manufacturer clearly decided to provide its customers a free service in that regard.

New textured stippling on the grip and a flared magazine well are more subtle additions, but perhaps the most endearing feature will be the ambidextrous slide release/stop. Not only is the mag release reversable for lefties, but finally southpaws can employ their shooting thumb in the manipulation of the slide controls: it is about time the Austrian Glock caught up to the ambi friendly nature of most of the other German manufactured sidearms. Not to mention dual wielding of Glocks is now a definite possibility, if a definite unwelcomed effort at most ranges. Though it is nice to know it is a possibility. Like the G4, the G5 offers additional backstraps and the extra magazine.

Glock aficionados have yet to meet a Glock they don’t like, at least a little bit, and the G has given them no reason to complain in the performance sector. Still likely to point up due to grip angle, the reduced trigger pull as seen in the G4 means less wandering off target for precision shooting and the dual recoil spring means less muzzle jump to bring the sights back on target for follow up shots. Glock has not messed up anything that they are known and appreciated for yet.

Can it Still be Trusted?

Glock simplicity is still apparent and while this generation has still only been out less than three years, field reports have brought nothing to suggest the gun does not perform as dependably under abusive situations as its forbears. The polygonal rifling still demands jacketed bullets for best performance, which, of course, is not a real issue for indoor range practice or use of the most preferred types of personal defense ammunition. 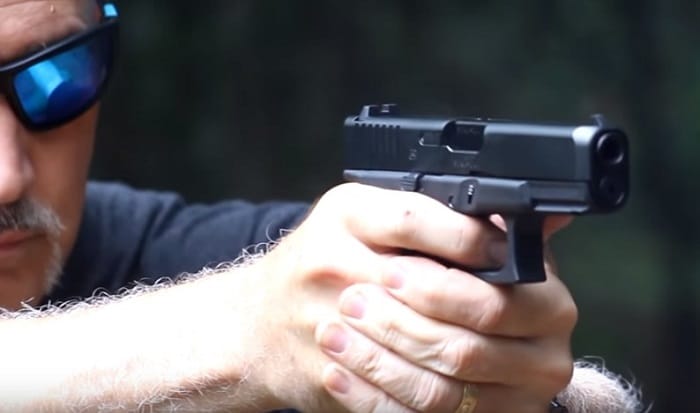 Can it be Dressed Up?

Like theG4 before it, the G5 offers additional backstraps for custom set up out of the box. This has made both the G4 and G5 pistols instant favorites among die hard Glock shooters as well as new er shooters choosing a primary defense, performance and simple general purpose pistol. Like the G4, various colored frames were produced for dealer exclusives. The dove tail cuts for sights accept all the earlier sight options for Glock pistols. While trigger kits and internal mods will doubtless be increased as time goes on, the G5 really begs the question as to what more is needed from a performance point of view.

That’s Fine, but How Does it Look?

Like a Glock. The absence of the finger grooves may be an inviting sight for anyone who has felt their fingers being manipulated by the grip of earlier models. A change in the metallic finish also makes the pistol deem less “dull.” But what really makes the Glock stand out is how it performs, even under less than ideal circumstances, and the G5 has not had any major failings to date. 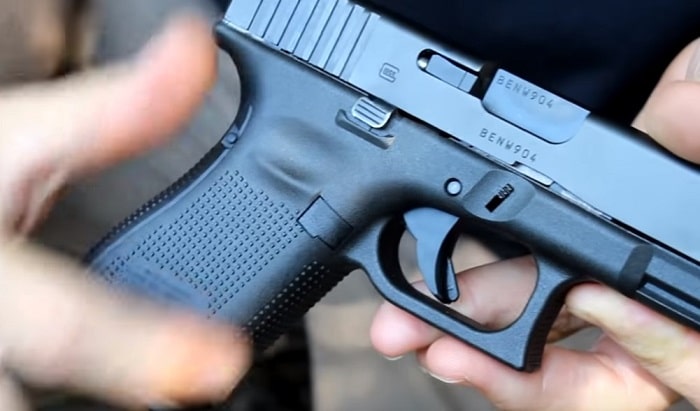 What Will it Set You Back For?

Gun prices of late have come down thanks to a somewhat apathetic political environment, consequently, the market price of the G5 is not that much higher than a G4 where it can be found. Given the ambi controls and the extra accommodations the gun comes with, there is little reason to choose a G4 EXCEPT a considerable difference in price in one’s specific locale in the world.

The Gen5 is Glock’s first truly ambidextrous pistol and many shooters are heaving a sigh of “it’s about time.” While features remain similar to the G4, for those who are involved in training, the G5 is a welcomed boon as it can be set for either hand and the lack of finger grooves allow different sized shooters to find their own way as to what works naturally without having to fit into an ill sized standard (for them).