Looking for some of the best 5.56 ammo? This guide is here to help!

The popularity of 5.56 speaks for itself. Due to the fact that it is the primary caliber of one of the most popular weapons in history, 5.56 is a round that nearly everyone will be familiar with.

However, many people don’t know some of its history. Due to the fact that it has gotten extremely popular in the civilian world within the last decade, there is often a misconception that it is a newer round.

The parent cartridge of 5.56x45mm is the .223 Remington. The two rounds are extremely similar, with the primary differences being some extremely minor differences in the chambers of the weapon and in the pressure of the cartridges. For all intents and purposes, the rounds are basically identical. What you need to know is that you shouldn’t fire 5.56x45mm ammo from a .223 chamber, but firing .223 through a 5.56x45mm chamber is okay.

So, for the history of the round, 5.56x45mm was originally developed in the late 1950s. It was designed specifically for military use, as they were searching for a small caliber high velocity round. Armalite started working on a scaled down version of the AR-10 to meet this demand.

Once the AR-15 was created, it was a joint effort to get the ideal round to meet the military’s requirements. Multiple different companies, people, and manufacturers were involved. All the way from the dimensions, to the projectile, to the powder load, there were many different people involved in the project that would eventually create 5.56x45mm.

The AR-15 was initially picked up in small numbers by the military in the early 1960s. However, 5.55x45mm still had not been named yet. In fact, when the military initially chose to use some AR-15s, they were still meant to shoot .223 Remington. But, due to the size of the projectiles, the cartridge was referred to in military publications and references as Cartridge, 5.56mm Ball ammunition.

If you don’t have time to read in depth the pros and cons of each round, I have some suggestion for you. There are plenty of factors to consider, and some weapons may prefer some rounds better than others, but as a baseline:

For hunting, you can’t go wrong with Reaper Ammunition 64gr Bonded Soft Point. It offers excellent terminal performance, and has been proven to be a very deadly round.

For precision shooting or any type of shooting that requires accuracy, Black Hills Ammunition 77gr Match and Hornady 55gr Superformance ammo are both excellent choices. Obviously, they are significantly different weights, so try both of them out.

This ammunition from Black Hills is an extremely high quality match-grade ammunition. Due to the materials and tight tolerances, this ammunition is of the highest quality. As far as accuracy is concerned, you really can’t beat this ammo.

The projectiles weigh 77 grains and are fired at 2750 feet per second. Due to the slower than average speed and heavier weight, this may limit the range of the round. However, with the proper sights and shooting techniques, it’s not unreasonable to expect 400+ yard ranges. With the correct weapon, this ammunition will allow for sub 1 MOA accuracy.

As far as terminal performance is concerned, don’t expect much. The purpose of this ammunition is for competition level accuracy. The biggest pro of this ammunition, other than the accuracy, is the fact that it is extremely reasonably priced. This is the best 5.56 ammo for target shooting and accuracy shooting.

If you need a longer range accuracy ammunition, check out the Hornady Superformance ammo. 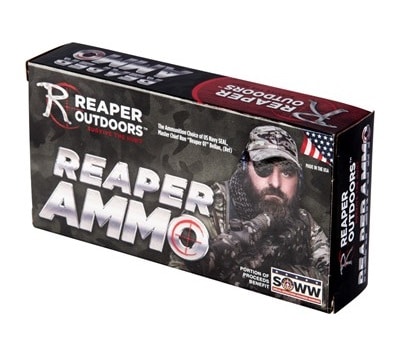 This jacketed soft point ammunition from Reaper is extremely deadly. Soft point ammunition works similar to hollow points, in that the front of the ammunition essentially breaks apart to allow the bullet to expand on impact. As the bullet moves through the target, it will continue to expand, damaging more tissue as it goes. The jacket around the softer metal allows the expansion to be reliable and controlled.

The 64 grain bullets of this ammunition are fired at around 3000 feet per second. This allows for a great combination of weight, velocity, and range. The bullets penetrate to a near ideal depth.

As far as cons are concerned, the primary con is the price. It is an expensive ammunition, although the quality and performance make up for the price, in our opinion.

Due to the performance of this round, this is the best 5.56 ammo for hunting and home defense.

While the accuracy is good, the price will turn most people off from using this ammo at the range. Similar to the Black Hills ammunition mentioned before, this Hornady Superformance ammo is an extremely high quality match grade ammunition. This ammunition excels for accuracy, and also has an extended range.

The bullet weighs 55 grains and is fired at over 3100 feet per second. Due to the lighter weight and extremely fast muzzle velocity, this round has a much greater range. Another factor that adds into the range of this ammunition is the boattail shape of the bullet. This reduces drag, which allows for the bullet to travel farther. In terms of accuracy, 1 inch MOA is to be expected.

The cons of this ammunition are that it is a little expensive, but it is not unreasonably priced.

In terms of uses, the accuracy and range of this ammunition will make it extremely popular for long range accuracy shooting. However, while it is not as good as the Reaper ammunition, the GMX bullet makes this a reasonable choice for hunting, especially hunting at longer ranges. When hunting any larger game, the jacketed soft point is really necessary, but for coyote and varmint hunting, this ammunition is a good choice.

This is the best 5.56 ammo for long range shooting. 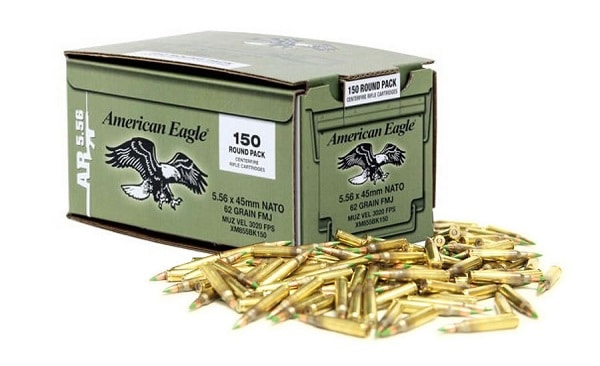 This Federal XM855 ammo is extremely similar to the green tip ball ammunition that the military uses. In fact, the differences between the two are essentially negligible. The ammunition is called full metal jacket ammo, which is just another term for ball ammo.

The 62 grain projectile is fired just over 3000 feet per second. It retains this velocity decently well out to 300 yards, so with the right weapon, optics, and techniques, 400+ yard range is certainly doable using this ammunition. In terms of accuracy, this is not a precision shooting round. However, with that said, it performs well. The ammo is used by the military, so you know it can’t be too bad.

As far as cons are concerned, there really isn’t much to talk about. As long as you know what you are getting, this is good ammo.

This is the best 5.56 ammo for the range and target shooting.

However, due to the fact that it is ball ammunition, it is not unheard of to use this for coyote and varmint hunting. After all, the military did use this in wars, so in terms of terminal performance, it obviously performs well enough.

It is also worth noting that Federal offers a variant of this ammo that has a boat tail bullet, which will increase the range of the round. 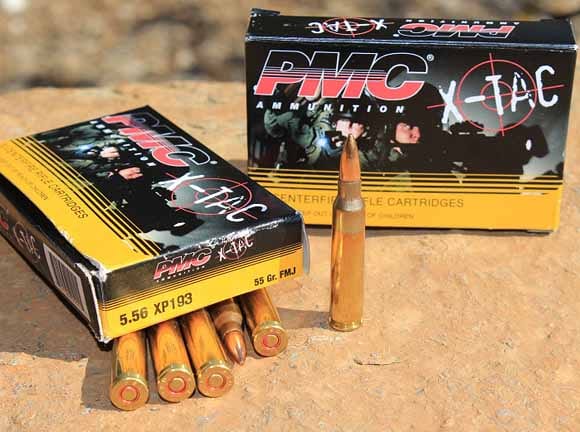 Last on our list is the X-Tac ammo from PMC. It is some of the most inexpensive 5.56x45mm ammo on the market, but it works well for target shooting. It doesn’t perform as well as the previous Federal ammo, but for basic range shooting ammo, this PMC ammo will work just fine.

The 55 grain bullet is fired at 3270 feet per second, which is a product of the lighter projectile. However, this also helps to increase the range pretty significantly. As you can see, this is the fastest muzzle velocity on our list. The bullet doesn’t begin to drop significantly until near 500 yards.

Similar to the Federal ammunition, this is another full metal jacket/ball ammo. It stays together and penetrates decently well, although the lighter weight may negatively affect the terminal performance. In terms of accuracy, this ammo does slightly worse than the Federal, but still performs plenty well enough for any type of general range shooting.

The pros of this ammunition are the price and the ballistics. The combination of the muzzle velocity and light weight will allow you to increase your effective range more than any of the other ammos will allow for. This expands the possibilities of what you are able to do on the range.

The cons are that it isn’t as accurate as the Federal ammo, albeit not by much.

As far as uses, this one would be great for any type of range shooting.

There are plenty of factors to consider, and some weapons may prefer some rounds better than others, but as a baseline:

For hunting, you can’t go wrong with Reaper Ammunition 64gr Bonded Soft Point. It offers excellent terminal performance, and has been proven to be a very deadly round.

For precision shooting or any type of shooting that requires accuracy, Black Hills Ammunition 77gr Match and Hornady 55gr Superformance ammo are both excellent choices. Obviously, they are significantly different weights, so try both of them out.

2 thoughts on “The Best 5.56 Ammo for Home Defense and the Range”