For many reasons, .22LR is a very popular cartridge to shoot. Despite its age, the rimfire cartridge is extremely relevant today due to how easy it is to find, how cheap it is, and how enjoyable it is to shoot. Although .22LR isn’t as accurate as some modern centerfire cartridges, it is very quiet and doesn’t have much recoil. As a result, it’s a popular cartridge for teaching new shooters the fundamentals, and is also popular for just general shooting.

Revolvers are excellent weapons. First of all, they are extremely reliable. It is nearly impossible for the internals of a revolver to jam. If a revolver fails to fire, it’s likely a result of the ammunition, and all you’ll have to do is pull the trigger again and it moves to the next round. Many people also find revolvers easier to use. They fill a wide variety of uses. I could write about revolvers for days on end and not have enough good things to say. I will leave it at this: I prefer revolvers to semiautomatic pistols, and highly recommend them.

As far as revolvers that shoot .22LR, there are quite a few options available. Are you looking for a new range gun? In this article, we will list our five favorite .22LR revolvers, and review them in depth. The revolvers will be reviewed in terms of pros, cons, uses, and manufacturer’s suggested retail price.

In terms of uses for a .22LR revolver, I’m going to guess that most people are shopping for a “fun gun,” for lack of a better term. You are probably looking for a cool firearm to take to the range and shoot with comfortably. Revolvers are becoming more and more uncommon, and as we talked about, .22LR is an excellent round for casual shooting. However, given that you are more than likely looking for a range gun, there are a few factors specifically that you should keep in mind: 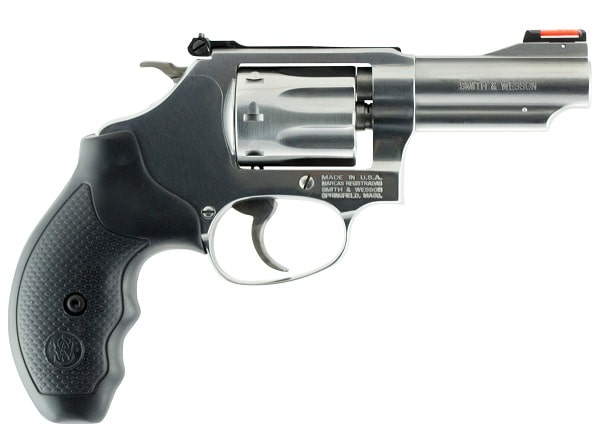 The Smith & Wesson Model 63 is a scaled down version of their classic J-Frame revolver. The J-Frame revolver has been around for over six decades, and has been extremely popular. It is well known for its quality, stainless steel construction, and reliability. They were extremely common in some police departments, albeit not chambered in .22LR.

The pros of this weapon are the stainless steel frame, barrel, and cylinder, the fiber optic sights, and the extremely high quality. Despite the fact that it is full stainless steel construction, the revolver is still relatively light, weighing in at 24.8 ounces. It has an 8 round capacity, and has a 3 inch barrel. The size of this revolver makes it widely applicable. It could be used for concealed carry, general defense, and of course, for recreational shooting. Additionally, the quality of this weapon makes it the best .22LR revolver on the market.

The biggest con of this weapon is the price. While it is an extremely high quality weapon, the price is also very high.

If you are just looking for a fun gun, this may be a tough pill to swallow. 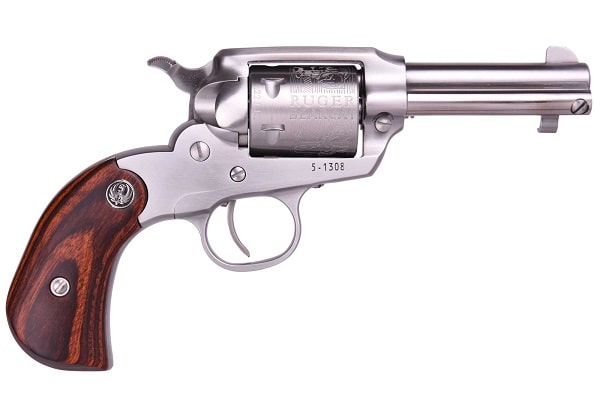 Looking for a larger, full size revolver? The Ruger Bearcat may be the one for you. It is similar in quality to the Smith & Wesson Model 63, but is significantly larger. It has that classic revolver styling, reminiscent of classic Civil War era revolvers. The cylinder is decoratively engraved to match the classic styling.

The pros of this weapon, other than the aesthetics, are the precision forged barrel, increased safety, and general quality. The barrel is very precisely made, which increases the accuracy of the weapon significantly. As far as added safety measures, Ruger has some patented technology incorporated that nearly eliminates the chance of an accidental discharge. The weapon has a 4.2 inch barrel, weighs 24 ounces, and a 6 round capacity.

Similar to the Model 63, the Bearcat is on the expensive side. While the Bearcat isn’t as expensive, it is still a pretty tough price, considering that the uses of this weapon are more limited than with the Model 63. Due to the size of this revolver, the uses are more or less limited to general shooting and potentially home defense.

This is the best large .22LR revolver available. 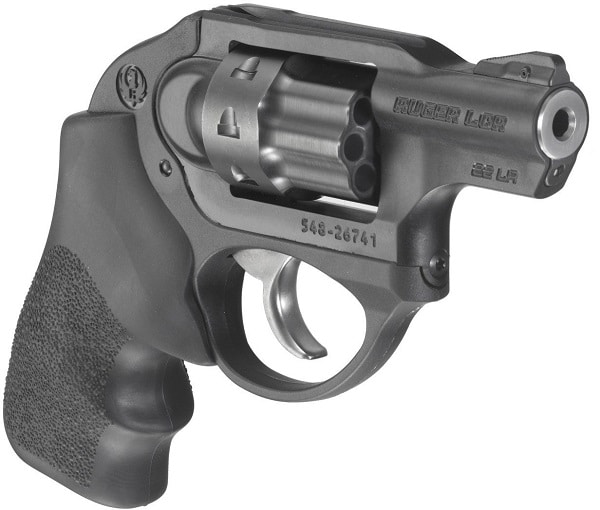 The Ruger LCR is the only hammerless revolver on our list. As to be expected from Ruger, this firearm is very high quality. It has an aluminum frame and polymer housing, which goes a long way in reducing the weight. However, for the sake of strength, the cylinder is still made from stainless steel. To reduce the weight of the cylinder, it has extensive fluting.

The biggest pros of this weapon are the size, weight, smooth trigger, and an excellent grip. The revolver has a 1.87 inch barrel, weighs 14.9 ounces, and has an 8 round capacity. The extremely smooth trigger pull comes from Ruger’s patented friction reducing cam.

Due to the extremely small size, light weight, and the fact that it is hammerless, this is the best .22LR revolver for concealed carry, if that is what you are looking for.

The cons of this weapon are that it is still on the expensive side, as far as .22LR revolvers go. The quality is there to support the price. However, as far as uses go, this one is somewhat limited. If you are looking for just a range gun, you could probably do better than this revolver. It is an excellent revolver, but is aimed mostly for concealed carry. There is no reason that you couldn’t shoot this at the range enjoyably, but you could probably find a better weapon for that specific purpose. 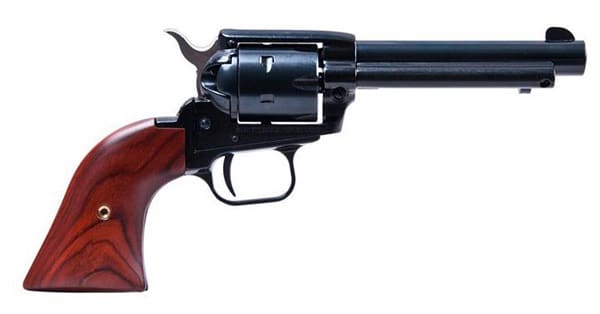 Did you like the sound of the Ruger Bearcat, but didn’t like the pricetag? Look no further than the Heritage Arms Rough Rider. Similar to the Bearcat, it has a lot of classic styling, but it comes at a much more affordable price. However, don’t let this lower pricetag fool you, this is still a quality firearm that is excellent to shoot.

The pros of this weapon are the styling, the accuracy, and the price. The accuracy is largely due to the precision machining. Heritage has tight tolerances, meaning that the revolver comes out both accurate and reliable. The grips are traditionally wood, but other materials are available, at an added cost. The revolver has a 6.5 inch barrel, weighs 33.4 ounces, and has a 6 round capacity.

As far as cons, the revolver is pretty large, which limits its uses. The frame is also made of aluminum, which isn’t as sturdy as stainless steel, although the cylinder and barrel are both made of steel. This would make an excellent range gun. The single action revolver gives you that wild wild west feel, and the revolver is accurate and fun to shoot.

This is the best .22LR revolver for the price. 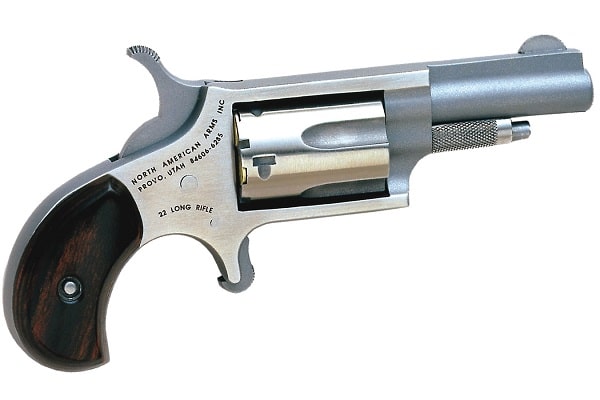 Up last is one of the most unique weapons you will ever see. The North American Arms 22LR is an absolutely tiny weapon. It has a 1 1/8 inch barrel, is 4 inches in total length, and is only 2.38 inches tall. The weight is a measly 4.6 ounces. This extremely small size is unique, but is also one of the best features of the revolver.

The size is the main selling point of this revolver, but the quality is also decent. It works consistently, and is fun to shoot. There are a few different versions of the same revolver available, each with slightly different sizes and features.

While it is not necessarily a con, one thing to keep in mind is that these revolvers don’t have a trigger guard. While this isn’t as big of a problem, considering that they are single action only revolvers, it is still something worth mentioning. While .22LR and revolvers are both great for teaching new shooters, you may want to avoid this revolver, as it is so unique in size, use, and safety features.

Due to the size, the uses of this revolver are somewhat limited. It could be used for concealed carry, but the lack of a trigger guard is concerning for that specific use. The revolver isn’t the most accurate on the list by any means, but the size does make it fun to shoot. It is a unique firearm, and something that many collectors would like to own.

Revolvers and .22LR cartridges alike are extremely old technology that have been around for decades and decades. However, they are both extremely well respected and popular to this day. Revolvers are easy to use and extremely reliable. The classic rimfire .22LR cartridge remains very popular because it is extremely easy to find, very cheap, and the limited powder make it a quieter round with less recoil. It is very popular for teaching new shooters for these reasons.

As you can see, there are quite a few different .22LR revolvers available. They range in size from the absolute smallest firearms on the market, all the way through much larger weapons that are reminiscent of classic Civil War era firearms. While this list isn’t a definitive guide by any means, we hope it has taken some of the guesswork out for you.

While there are many features to consider, the biggest ones to consider, as mentioned before, are: price, quality, and accuracy. Once you’ve identified your use for the weapon, it will be easier to select which revolver is right for you. If you are looking for a jack of all trades, you certainly can’t go wrong with the Smith & Wesson Model 63.

3 thoughts on “Buyers Guide and Review of the Best .22LR Revolver”